The young striker underwent a trial at Leeds United, before Manchester United got in touch.

Sørum’s dad told United.no that the club plan to bring the youngster over for a trial. His father is a United fan and a switch to Old Trafford would be a dream move and a clear preference over Leeds. Additionally, his agent is Atta Aneke, who represents Odion Ighalo, who joined United on loan last year.

It of course will help that United’s manager is former Norwegian international Ole Gunnar Solskjaer.

Sørum reportedly wants to join a club which plays attacking football and views United as a ‘perfect match’.

Currently plans to bring him over for a trial are on hold due to the pandemic.

There is one very large obstacle for United when it comes to signing Sørum and this is the new Brexit rules. United and all English clubs cannot sign players under 18 from outside the UK. This puts a pretty large stumbling block in front of the deal.

United could still invite Sørum over for a trial and sound likely to do so. Russian talent Sergey Pinyaev has had multiple trials with United in recent seasons even though he is ineligible to join until he joins 18 in 2022.

It’s a way for United to express interest, keep track of the players, and ensure they are at the front of the queue if they have to wait until the player is 18.

It is actually good to see United are continuing to scout young talent from abroad despite the Brexit red tape, and it is very possible the club try and establish some kind of work-around over the next year. 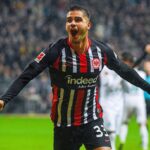 Andre Silva added to list of Summer targets for United.