United opted for the usual 4-4-2 when we dropped into a deep block – statistically the formation with the greatest pitch coverage. This was an attempt for some control of the wide areas, and Liverpool’s threat from there, however, early on, their 3v2 overload in midfield left United struggling.

McTominay and Fred went man for man on Liverpool’s two advanced CMs, leaving the third (normally Thiago) as a spare man – hence he was often free to dictate play during the first 20 minutes. Furthermore, McFred were both guilty of diving in and getting beaten easily (especially Fred – dribbled past 7 times vs Scott’s 3), and since the other one of the two was marking a different Liverpool midfielder, they were too far away to recover and help out.

This gave Liverpool the platform to dominate the early stages. Their 3v2 in the midfield areas also allowed them to press easily when United attempted to play through McFred, again preventing United getting out, and sustaining the Liverpool attacking pressure.

After this early spell of pressure, Bruno Fernandes dropped deeper out of possession to help out in midfield by tracking Thiago. This was effective and helped United to grow into the game.

The selection of Pogba on the right wing raised eyebrows, but it was a deliberate effort to evade Liverpool’s midfield pressure. Liverpool’s midfield produce the majority of their defensive workrate and pressure, so when receiving the ball out wide, the pressure on Pogba came from those central players. Playing on the left, Pogba would have to turn towards the pressure to play the ball behind the defence/over the top, whereas on the right, his body could naturally be between the ball and the pressuring players coming from the inside, hence he was more easily able to play balls behind the Liverpool defence. Clearly, due to the angle of the pass, balls from the right are less likely to be intercepted by Allison’s aggressive sweeping.

Finally, it’s worth noting United’s best chances came from the fullbacks getting forward: Shaw crossing to Bruno, and AWB for Pogba. Given the magnitude of the game, and the natural fear of the Liverpool counter attack, United were generally not too aggressive with overlapping fullbacks – possibly the missing link in getting a result. 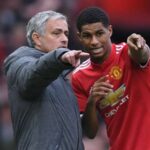