Luke Shaw will be sidelined for a month after picking up a hamstring injury in Saturday’s 3-1 win at Everton, the Premier League club confirmed on Tuesday.

Shaw, limped off during the closing stages of the match and was replaced by Axel Tuanzebe for the final 25 minutes.

This is becoming a recurring theme or for Luke specifically, a nightmare, as everytime he hits a purple patch, its cut short by an injury. Shaw had played every minute of United’s Premier League campaign before the injury and his absence will pave the path for new recruit Alex Telles, who hasn’t played since testing positive for COVID-19 last month but has since recovered and will make his long awaited premier league debut.
In the meanwhile wishing you a speedy recovery Luke! 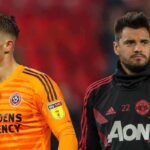 Solskjaer does a 360; Romero to stay, Henderson to be loaned?