Borussia Dortmund and England winger Jadon Sancho, has dismissed suggestions that his form has dipped due to a move to United, which failed to materialise. The 20-year-old is yet to find the net in six league games this season after scoring 17 in the previous campaign.

Jadon Sancho emerged as Manchester United’s number one transfer target during the summer transfer window, with the British media reporting that the Premier League side had a sizeable bid , which was still 20 million short of what Dortmund were asking for.

Due to some truely groundbreaking negotiation (or lack thereof) by Ed Woodward, Sancho remained at Dortmund, with the club officials bemused with Woody’s tactics.

While Dortmund were adamant that Sancho would not be allowed to leave for any lesser than his 120 million euros price tag, Woodward treated the decision as a bluff from Dortmund’s side. At the eleventh hour, he seemed to realise something was amiss and still bidded lesser than what Dortmund were asking for. Even if he had decided to pay the asking amount, they still wouldn’t have sold a crucial player at the last minute, without having an adequate replacement. This still hasn’t deterred United from trying to get the player in the coming transfer windows.

Scoring a goal in England’s 3-0 friendly victory over Ireland on Thursday, must surely have done him a world of good, as the winger expressed his desire to get back at his best.

While asked if the speculation has affected his form, Sancho told ITV “No I don’t think so. I feel like every player has a little dip in their career and I’m going through that at the moment.

“It’s just how I’m bouncing back and I’m just happy to have managers who have faith in me and keep starting me,” he added.

“I expect a lot from myself personally. When I play, I always try to assist and score and help the team. A couple of games ago, I hadn’t been scoring or assisting but I knew I had a chance.”

Even over the course of last season, Sancho took quite a while to start off and when he finally did, there were goals and assists galore.

Let’s just wait and watch, shall we ? 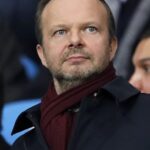