Red Bull Salzburg have garnered a bit of a reputation for producing players in recent years. In the past five years some of Europe’s best and brightest prospects have plied their trade in Salzburg: Sadio Mané, Dayot Upamecano, Naby Keïta and the wonderkid coveted by all, Erling Braut Håaland. They are just a few examples of players that once played for Salzburg that are now household names playing for some of Europe’s biggest teams.

History would suggest that it is only a matter of time before another star in the making gets his big break, with a transfer seeing him leave the Austrian Champions. Patson Daka could very well be that man.

Born in the Zambian city of Chingola, Patson Daka provides an inspirational success story, going from the school playing fields in his native Zambia to now leading the attack at one of Europe’s most exciting teams.

Like Haaland, Daka grew up with the benefit of having a father who played professional football – in fact Daka’s earliest memories of football are watching his father Nathtali taking on opponents out wide. Nathtali’s sad passing during Patson’s youth has provided a main source of motivation in his own footballing journey:

“He didn’t have the opportunities I have today. I feel I have achieved the dream he had for me, to see me play at a high level and come to Europe, and create my own legacy. It drives me every time because, wherever he is today, he is proud of me.”

Even though the footballer is very talented, luck has played her role in his ascent. The youngster was taking his school exams when trials to represent the local province were being held. Persuaded by a friend, Daka went along and made an immediate impression.

Less than 12 months after this trial he was captaining Zambia at youth tournaments and even earned a call-up to the senior national team aged just 16. Daka’s impressive performances for Zambia in the Under-17 Africa Cup of Nations(AFCON) in 2015 captured the attention of former Mali international Frederic Kanoute, which eventually led Daka to RB Salzburg after a loan spell at FC Liefering.

2017 proved to be a breakthrough for Patson Daka, the Zambian was a pivotal figure in RB Salzburg’s surprising UEFA Youth League success, scoring in the semi-final and final against FC Barcelona and Benfica respectively.

Internationally, Daka earned individual honours when named 2017 Under-20 Africa Cup of Nations Best Player, in which he was also its top-scorer, 2017 CAF Youth Player of the Year and 2017 CAF Most Promising Talent of the Year. The latter is a very prestigious award, previously won by the likes of Mohamed Salah and John Obi Mikel.

Without a shadow of a doubt the most important part of a striker’s role is to score goals. In 2020/21 across 31 matches, he has amassed a total of 27 goals and 8 assists. He holds an impressive 79 minutes per goal involvement. He has been mainly used in a two-man attack in RB Salzburg’s preferred 4-2-2-2 formation. We can see in the following image that Daka is comfortable shooting with either foot, with a total of 56 shots (48%) coming from his right foot and 45 shots (39%) with his left.

Another important takeaway from the above data is that Daka rarely shoots from outside the box, with most of his shots being taken inside the penalty area. According to xG, he is still finishing difficult chances and isn’t scoring just tap-ins. Across the entirety of Europe, no other striker has a higher conversion rate than Daka, who has an astounding conversion rate of 36.5%.

The Zambian has a cool head with excellent composure to boot; he frequently uses his first touch to buy himself a yard of space before firing into the far corner, managing to do this even when under pressure. He also makes intelligent, late runs into the box to score from close range frequently. It’s these runs combined with his pace and power that make him a defender’s worst nightmare. He is also quite comfortable taking the ball onto either foot when shooting, meaning that a defender isn’t able to show him onto his weaker side. Just like, but not as ambidextrous as, our own wonderkid Greenwood.

Another aspect of his game that has to be highlighted is his anticipation, the ability to be at the right place at the right time, scoring those scrappy goals. Several of his goals this season have come from pouncing on rebounds. A poacher is much needed in our squad in the eventuality that Cavani leaves.

Daka scores all types of goals. A major factor behind why he has so many shots is due to his movement off the ball, it compliments his attributes as well as fitting in perfectly with Jesse Marsch’s tactics.

He loves to exploit the half-space and on several occasions during a match, he will make a darting run into the half-space. He does this for one of two reasons, either to provide his team-mates with a passing option in behind the opposition defensive line or to take away defenders so that a team-mate has space to score.

Daka is lightning quick off the mark and this is a major factor in his style of play, he looks to exploit opposition defences by using his pace to get in behind a defensive line. At 183cm (6ft) he certainly isn’t the tallest striker around, but if we combine his physical stature along with the abundance of pace he possesses, he becomes a powerhouse of a striker. One capable of holding off defenders, retaining possession in tight areas by shielding the ball and linking up with his team-mates

In the image above, we can see Daka’s recoveries in the final third this season. As we can see the Zambian had made 39 final third recoveries via a mixture of counter-pressing and positional pressing situations. 17 of the 39 recoveries (43%) result in a shot and 10 of those end up on target. We can also see that Daka commonly presses the opposition’s left-back area with 12 recoveries compared to three on the opposite flank. There is also a cluster of three goals from recoveries around the six-yard-box. Daka is clearly active and efficient when it comes to pressing; which makes him a perfect fit in Salburg’s gameplan.

Patson Daka is a sensational player. His knack of scoring goals is not a fluke; his pace, power, movement and positioning are all just a few examples of what make him an exciting prospect for the future. His desire to win the ball back and press selflessly for the team would make him an ideal fit for a high pressing team who is on the look-out for a new talisman.

In the likelihood we miss out on Haaland, which me most likely will, Patson Daka provides us with an excellent alternative. 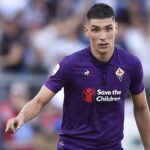 Why the new ‘Vidic’ could be Maguire’s ideal partner ? Milenković tactical profile.

Declan Rice: The answer to our midfield conundrum.