At just 19 years of age, the Old Trafford academy graduate is an already established senior star. A healthy return of 17 goals from 49 appearances across all comps, last season, prompted Gareth Southgate to call up Mason Greenwood for the England Squad.

He made his debut for the three lions on the 5th of September in a 1 – 0 away win over Iceland, in which he came on as a substitute late in the second half.

Things went spiraling out of control after this, with him and his England teammate Phil Foden, had their infamous romp with two Icelandic models. They were swiftly (and rightfully) removed from the England squad, for breaking coronavirus guidelines and were fined by the Iceland police as well . Playing international games during a global pandemic is idiotic and on top of that, breaking specific quarantine rules, is equally stupid.

Greenwood and Foden both issued apologies on their respective clubs website and we thought that would be the end of that. But that was not to be as off-field dramas have yet again hindered his contributions this campaign. While Greenwood has not behaved in an exemplary manner, his misdemeanours are not exactly shocking, not that it has stopped the printing of plenty of negative stories.

According to the Athletic, Solskjaer spoke to Southgate and reiterated the 19-year-old needs to ‘re-focus’ at Carrington over the current international break.

Greenwood wasn’t even named on the bench in United’s 3-1 win, at Goodison Park, against Everton. His absence was put down to a mystery illness.

During the same time other rumours started floating around like, the Times reporting that Bruno Fernandes was left irritated with Greenwood after he failed to run onto a pass. It further said was Greenwood was lethargic during the entire training period and club staff are afraid his lack of sleep is slowing his development.

Over the weekend Andros Townsend empathized with Greenwood and he said the following “Of course it starts with the player himself, but I can empathise with Mason Greenwood having been through that ‘build you up to knock you down’ media scrutiny. It’s tough and he needs players around him like Harry Maguire, experienced players who have been through it, to put their arm around him.”

“HE NEEDS HIS MANAGER TO STAY BY HIS SIDE, WHICH I KNOW OLE WILL. HE NEEDS FAMILY AND GOOD FRIENDS AROUND HIM, AND THE OTHER THING IS HE NEEDS TO SEE A SPORTS PSYCHOLOGIST.”

Having taken to the Premier League like a duck to water, after plundering goals for fun at every age group through United’s academy, it is easy to see why Greenwood as any elite footballer, is comfortable in his wealth and lifestyle.

Greenwood , being a shy, reserved character this new-found fame will not sit as comfortably with him as it does with others. Additionally while dealing with success and fame, he has been dealing with personal tragedy too.

In the game against RB Leipzig, Mason dedicated his goal to his close friend and Manchester City player Jeremy Wisten, who tragically took his own life at the age of 18 last month.

Articles and rumours continue to potray Greenwood in a negative light, talking about how lazy and uninterested he has been, while he has lost a close friend to suicide and has been endlessly attacked and abused by football fans and the media alike.

Not to put any pressure on the lad, but in my eyes I view him as a Van Persie regen. Left foot ? Right foot? No problem. The boy is absolutely lethal in the 18 yard box. Ambidexterity is a rare sight in the premier league and with all sorts of finishing in his locker, there is nowhere to go, but up for the lad. His potential is frightening and if developed as per plan, he could be amongst the best footballers of this generation.

Mason Greenwood’s talent is one that should be cherished. The stories out there about him and the headlines being written is enough. This has to stop. Digging for something that is not there, with a young, introverted teenager, has the potential to scupper something that could be very special indeed. 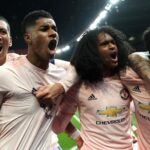 New beginnings; why I chose United.